Fundsmith equity manager Terry Smith, who was under media scrutiny earlier in the year for outflows, showed that his fund is still as consistent as ever

Terry Smith (pictured left) has debunked the great value rotation of 2021 by pointing to Fundsmith Equity’s performance this year against its value peers, while defending his fund from commentators that had written it off.

In his semi-annual letter to shareholders, the FE fundinfo Alpha Manager dismissed the narrative that there was ever a rotation out of quality into value stocks.

He admitted that investors could have made good gains by buying value or recovery stocks at the bottom but noted that holding the same stocks during both the downturn and recovery would have underperformed his own portfolio significantly.

Fundsmith Equity fell 21% from its highs during the Covid crash, whilst the S&P 500 Value index fell 37%. The value index then rallied 79% from the bottom whilst Terry Smith’s portfolio rallied 59%.

Smith highlighted how from the pre-Covid highs to the first half of 2021, Fundsmith Equity delivered 25% versus 12% from the value index.

“There are several lessons to be learnt from this, not the least of which is that no amount of recovery or low valuation will turn a poor business into a good one and quality is the main determinant of long-term performance,” he said.

However, Smith admitted that there had been a shift as markets started to sense an end to the economic disruption caused by the lockdowns in the final quarter of 2020.

“In such a situation our fund is always likely to underperform for a period, after all the companies we invest in mostly have little or nothing to recover from,” he said.

But Smith cautioned against investors who try to time the value or recovery trade by highlighting the performance of the S&P 500 Value index relative to his own portfolio.

He also pointed to articles written this year that had highlighted significant outflows from his flagship fund in the spring, at the height of the value rotation.

“If you have been reading what investment commentators have been saying during this period you might be rather surprised that our fund has fared so well,” he said. “You might even be surprised that we are still here.”

Although £130m was withdrawn from the fund in net outflows over the first six months of the year, he said the £3bn rise in the value of the fund “dwarfed” this.

“However, I am not expecting these facts to produce a change of heart amongst some commentators. As I believe former German Chancellor Helmut Kohl said: ‘Nothing so disappoints deserting rats as a ship which refuses to sink’.”

The manager of the £27.1bn Fundsmith Equity fund, pointed to articles that had highlighted a series of outflows from his flagship fund in spring this year amidst the value rotation.

“If you have been reading what investment commentators have been saying during this period you might be rather surprised that our fund has fared so well,” he said. “You might even be surprised that we are still here.”

He criticised media headlines that suggested that the fund’s net outflows of £130m during the first half of 2021 were something investors should be concerned about.

Smith said the value of net outflows were “somewhat dwarfed by the £3 billion rise in the value of the fund”.

Performance of the fund year-to-date 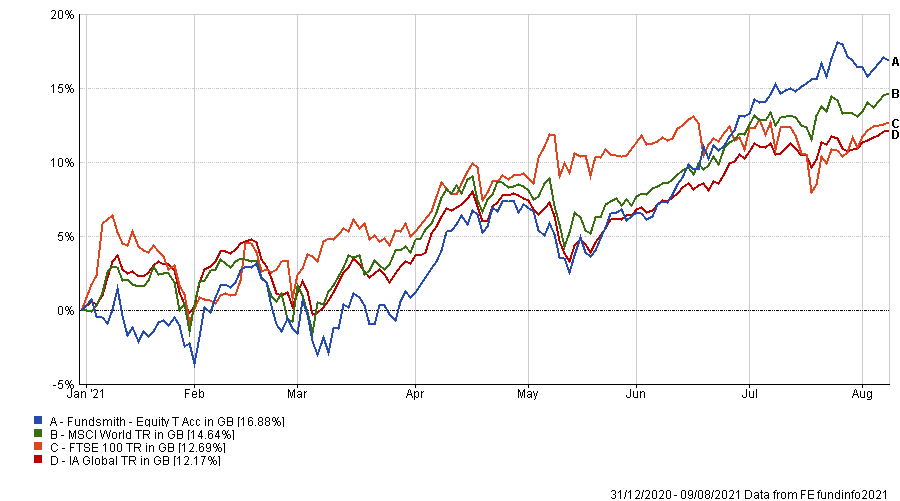 Some of the biggest contributors to the fund in the first half of the year were PayPal, Microsoft and IDEXX, which accounted for 1.8%, 1.5% and 1.4% of the fund’s performance respectively.

Over the past decade, Fundsmith Equity has delivered top-quartile returns of 539%, compared to 277.8% from the MSCI World Index and 225.7% from the average IA Global peer.

Fundsmith’s semi-annual report noted a 2.69% portfolio turnover and voluntary dealing costs of 0.005% which combined with an OCF of 1.05% amounted to a total cost of 1.06%.

The above article is for informational purposes only and was originally published by Trustnet.

The Fundsmith Equity Fund continues to be a high quality, global equity fund that we are comfortable proposing for investors to hold as part of a medium to longer term, diversified portfolio.

The Fundsmith Equity Fund can be accessed on most of the Offshore Investment Platforms and Offshore Life Company policies. Investments placed via Ethical Offshore Investments will result in no upfront / entry fee or commission charged and we will place the investment into the lowest cost version of the fund available on the relevant platform.

For information on the Fundsmith Equity Fund or the other high quality global equity funds that we would propose alongside the Fundsmith fund, please click on the More Information button below.