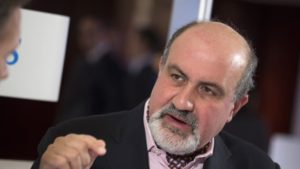 The author of “The Black Swan” said in a recent paper that the largest cryptocurrency by market cap has failed to satisfy the notions of it as a currency without government, as a hedge against inflation and as a safe haven investment.

“Few assets in financial history have been more fragile than bitcoin,” he said.

Taleb had previously spoken more favorably on bitcoin, particularly on its potential to help people circumvent capital controls in markets that rely on them to manage their exchange rates. He called it “the first organic currency” in the foreword of “The Bitcoin Standard” in 2018 and “an insurance policy” against government control over currency.

In his recent paper, “Bitcoin, Currencies, and Fragility,” published in late June, Taleb, a probability researcher and former longtime quantitative trader, says bitcoin is worth “exactly zero” partly because it requires a sustained amount of interest to maintain it.

By contrast, “gold and other precious metals are largely maintenance free, do not degrade over an historical horizon, and do not require maintenance to refresh their physical properties over time,” he said.

Volatility as a key characteristic

Bitcoin was created in 2008 and has always been notoriously volatile, though the Covid-19 pandemic year is the first time it has experienced such extreme volatility in the face of a global economic crisis.

Taleb noted that in March 2020 bitcoin dropped further than the stock market and recovered with it “upon the massive injection of liquidity.” That’s “sufficient evidence that it cannot remotely be used as a tail hedge against systemic risk,” he said.

He said bitcoin tends to respond to liquidity and that it’s unclear what would happen if the internet experienced even a regional outage, particularly if it took place during a financial collapse. 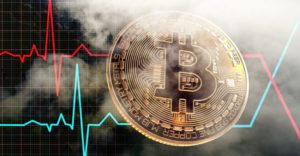 Taleb noted bitcoin “has maintained extremely high volatility” of between 60% and 100% “throughout its life,” though that doesn’t mean a cryptocurrency can’t “displace fiat” — that is, money backed by the government that issues it but not backed by a physical commodity such as gold.

“It is indeed desirable to have at least one real currency without a government,” he wrote in his paper. “But the new currency just needs to be more appealing as a store of value by tracking a weighted basket of goods and services with minimum error.”

Taleb is distinguished professor of risk engineering at New York University’s Tandon School of Engineering and a scientific advisor for Universa Investments.

Cryptocurrency exchange data shows bitcoin trading fell more than 40% in June of this year, according to CryptoCompare. In the same month, the price of bitcoin hit a monthly low of $28,908.

Still, June volume ranks in the top five months of volume recorded ever, according to Kaiko data.

The above article is for informational purposes only and to provide the opinions of a particular, well known financial commentator on the subject of the value of Bitcoin. We do not endorse, or denounce the opinions made in this article…… As Bitcoin and other Crypto currencies are not regulated assets or investments, Ethical Offshore Investments can not provide recommendations on whether to buy, hold or sell Crypto currencies.

However, if you are interested in opportunities that invest in the technology companies that provide the various services to Crypto investors, please click on the More Information button and we can provide information on the various regulated Managed Funds and ETF’s that specialise in investing in these types of companies.