Baillie Gifford’s Iain McCombie says even if value does have “its day in the sun”, he will still be sticking to finding the few exceptional companies with strong fundamentals that drive stock market returns.

While investing in growth stocks would have been the correct decision a decade ago, some investors fear the emergence of inflation could bring value stocks back into favour. 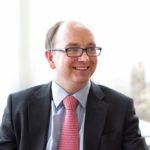 Iain McCombie (pictured left), manager of the £8.5bn Baillie Gifford Managed fund said: “Obviously growth has had a very good decade relative to value, so the question on everybody’s mind is: what’s going to happen over the next 10 years?

“I think the honest answer is we don’t know.

“You have to assume at some point value will have its day in the sun, the question then is: well what are you going to do about that?”

McCombie, who has been managing the fund alongside Steven Hay since 2012, said: “We’re growth managers, we’re not going to chase value stocks, we’re going to continue to do what we’ve always done.

“It’s the same as we’ve done for the last 34 years – we’re going to find companies with good strong fundamentals and we think in the long run share prices follow fundamentals.”

He believes growth against value debate is a an “overly simplistic” way of thinking about investing.

“When you look at the data, a very small number of stocks actually contributed most of the market return,” he said.

“So growth or value doesn’t really capture what you’re trying to do – which is to find those exceptional, small number of businesses that actually have the outsized returns you can get from investing in equities.”

McCombie emphasized that Ballie Gifford’s investment philosophy is to deploy long-term capital to support these select businesses with the potential to generate outsized returns.

“We’re not into short-term speculation,” he said. “So we’re going to have periods like the first quarter of this year where we underperform the index. But we don’t really care about that because what we’re trying to do is to position the fund for the next five or 10 years.

“I’m afraid we’re not going to outperform every quarter, and if that’s what you want from us, don’t invest with us because that’s not our style.”

The Baillie Gifford Managed fund has slightly lagged its peers in recent months, with its year-to-date total returns of 1.13 per cent versus 4.4 per cent from the average IA Mixed Investment 40-85% Shares peer. 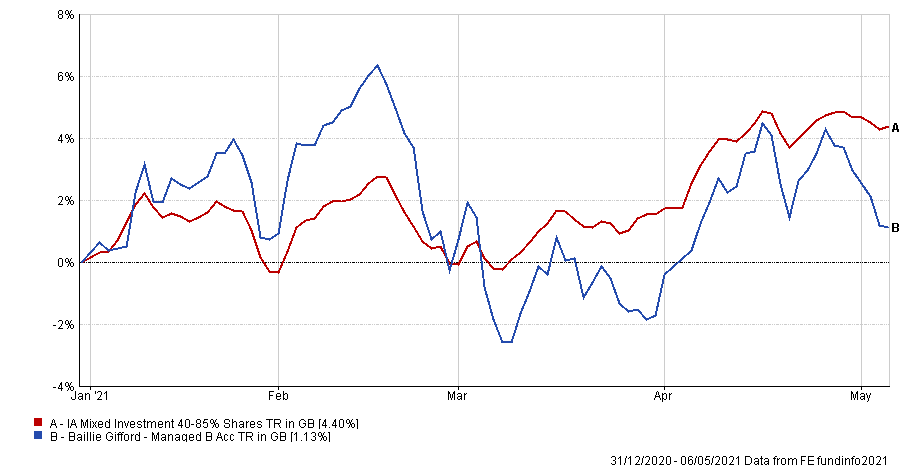 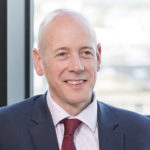 The lagging performance has come off the back of growing fears surrounding inflation and a rotation from many investors out of growth stocks into value stocks. Yet despite this, co-manager Steven Hay (pictured left) isn’t worried about inflation, if it ever does materialise.

“There are reasons why the probability of inflation picking up is a bit greater than it’s been in the past,” he said. “We’ve had three decades of inflation really falling and supporting bond yields and asset prices, but there are a number of things in the mix now, which might lead to higher inflation in the future.”

He believes that, for a balanced fund, Baillie Gifford Managed is “exceptionally well positioned” for an inflationary scenario, if it did come.

“We run with a very high strategic weight in equities – 75 per cent – which puts us in a really good position relative to a fund that perhaps had a lot more in bonds typically,” he explained. “Within the equity part, we are looking for companies that will shape the future that will be in good competitive positions. Those are companies that will have pricing power in that inflationary future and that’s really the key – then the revenues can keep up with inflation.

“We don’t really worry too much about that inflationary future. The companies that we like anyway, should do reasonably well in that in that future.”

Hay said that he doesn’t necessarily have a strong view that interest rates will rise, but acknowledged that it is possible.

“I would say it’s not a slam dunk that inflation is high in the future,” he added. “Yields have already risen a bit we’ve seen a few false dawns in terms of inflation picking up. “While it’s true that we think bonds are less attractive at the moment, it is by no means certain that they don’t deserve a place in the portfolio.”

He argued that within a fixed income part of a fund, investors can protect against inflation because some bonds can do quite well in an inflation scenario.

“High yield bonds in particular – where you’ve got your more highly indebted companies – a little bit of inflation can be really quite good for them,” Hay explained. “You can also keep the maturity or duration of the bonds very low so that they don’t really respond much to interest rate picking up and that can help you as well.

“So I think bonds can still play a useful part in inflation. We think we’re well positioned for an inflationary scenario if it were to happen.”

Baillie Gifford Managed has delivered a total return of 114.87 per cent over the last five years, compared to 49.45 per cent from its peer group average.

Performance of the fund versus sector over the last 5 yrs 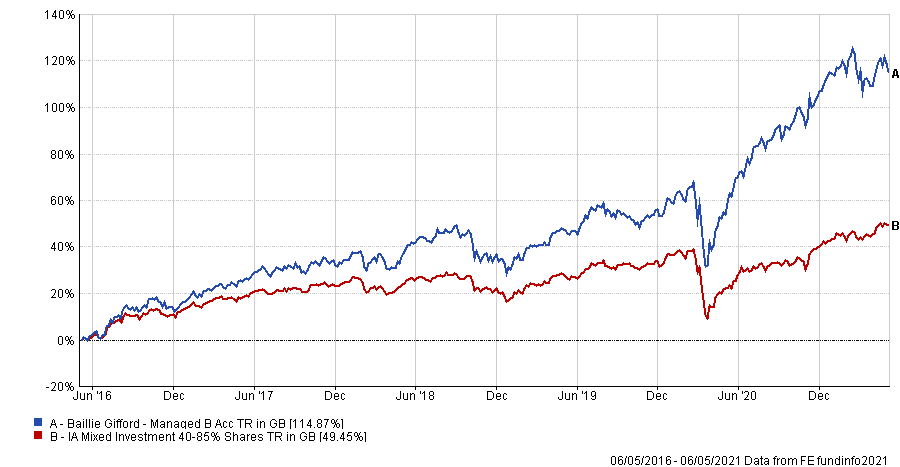 Clients of Ethical Offshore Investments can get access to this highly rated Baillie Gifford fund, where we will allocate to the B share class version of the fund. This will ensure that there is a Nil entry fee and that investors will access the version of the fund that has a lower annual management charge (0.42%pa as opposed to 1.51%a for the A class version).