This CNBC article highlights some of the biggest losers… 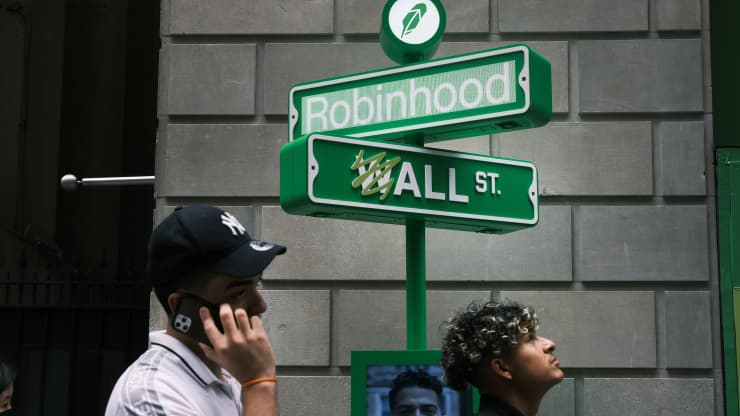 People wait in line for t-shirts at a pop-up kiosk for the online brokerage Robinhood along Wall Street after the company went public with an IPO earlier in the day on July 29, 2021 in New York City.

Macro conditions were already troubling for tech. With inflation at a 40-year high and the Federal Reserve signaling a series of interest rate hikes on the horizon, investors started the year by fleeing growth stocks, sending the Nasdaq in January to its worst month since March 2020, the early days of the pandemic.

The outlook over the past three weeks has gone from bad to substantially worse. Russia’s invasion of Ukraine last month rattled an already fragile stock market, sprinkling geopolitical unrest into the stew of volatility. Oil prices just spiked to their highest in over 13 years, and other commodity prices are on the rise on supply concerns as Russia is a key producer of wheat, palladium and aluminum.

Energy and utilities are the only places in the U.S. where investors are finding comfort. While everything else is getting hit, the highest-growth tech stocks are proving unpalatable to all but the most fervent industry bulls.

“The mood of the market is real foul right now for good reasons,” Snowflake CEO Frank Slootman told CNBC’s “Mad Money” on Wednesday. Shares of the cloud data analytics vendor plunged even though revenue beat estimates and the company gave an upbeat forecast.

Snowflake is more than 50% off its 52-week high reached in November. That makes the company a relative safe haven compared to wide swaths of the tech industry. Numerous stocks have lost at least three-quarters of their value since peaking in late 2021, and some well-known names are down 90% or more.

Byron Deeter, a partner at Bessemer Venture Partners and a cloud evangelist, said the median member in his basket of subscription software stocks is down 53%, and that price-to-sales multiples, on average, have compressed from 25 to below 12.

“This sector has just been pounded and yet the macro trends remain very much intact,” Deeter told CNBC’s “TechCheck” on Monday. “You continue to have these extremely high-quality names but they’re on sale across the board.”

CNBC pulled a list of tech and tech-adjacent companies currently valued at $1 billion or more that have lost at least 75% of their value from their 52-week highs. Here are 10 of the most notable companies. 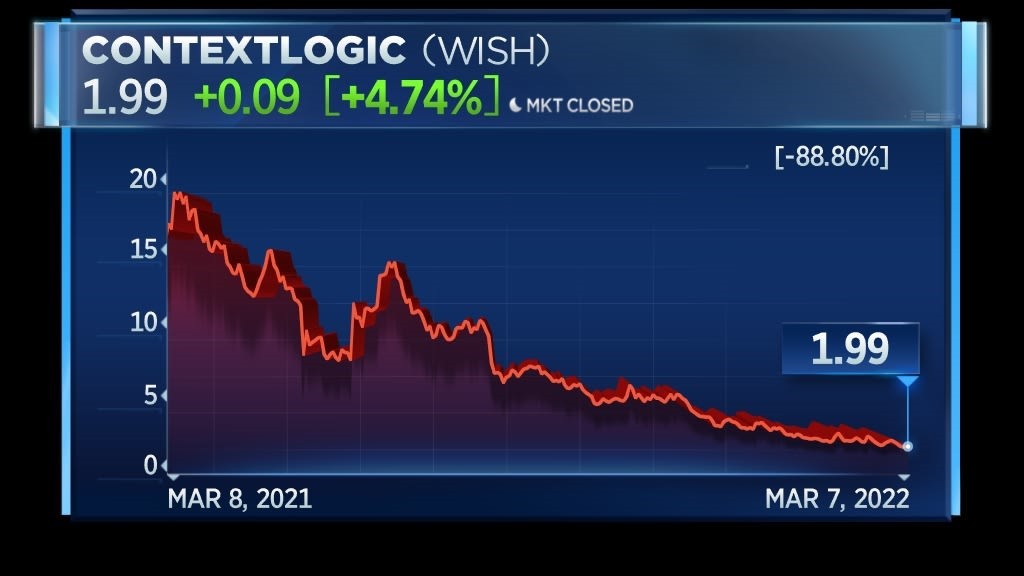 Discount mobile commerce app Wish has struggled since shortly after its IPO in December 2020. The stock priced at $24 and got as high as $32.85. But it’s now trading at $1.99, and is more than 90% below its intraday 52-week high from almost a year ago.

Wish’s challenges are separate from the broader issues facing tech stocks. Fourth-quarter revenue plummeted 64%, declining for a third straight period. The story has gotten worse each quarter, with the primary problem being that people are abandoning the app.

“These numbers tell me we need fresh thinking to guide us back to the growth that we know is possible,” Talwar said.

Robinhood’s stock, which started trading in July, has largely been a bust. It’s down 70% from its IPO price and 87% from its high in August.

The early hype cycle for Robinhood would have been hard to sustain in the best of times. On Aug. 3 investors pushed the stock up 24% despite a lack of news. On Aug. 4, it went up 50% with the launch of options trading, which has been a popular choice for Robinhood’s users. But a day later the stock fell almost 28% after the company said existing shareholders would sell up to 97.9 million shares.

In January, the company gave a bleak forecast for the first quarter and showed a decline in monthly active users. 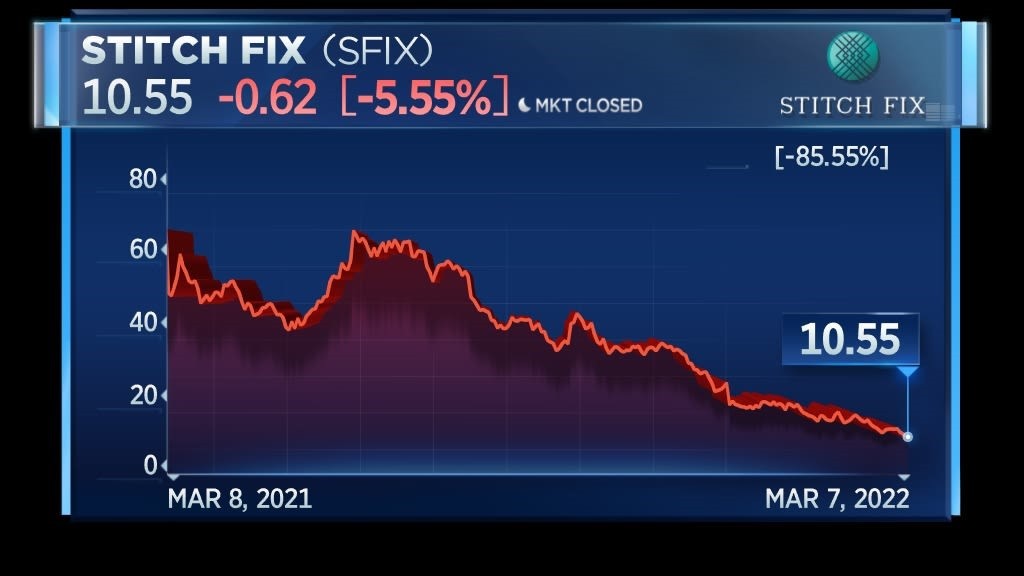 In 2020, Stitch Fix more than doubled in value, driven by the broader surge in e-commerce stocks. Since January 2021, the shares have been on a downward trajectory. They’re down 85% from a year ago, the 52-week high, and over 90% from a record a couple months earlier.

Stitch Fix shares plunged 24% on Dec. 8, after the company warned that weaker-than-expected growth in new customers would weigh on 2022 revenue. Much of the slowdown was attributed to the rollout of a product called Freestyle, geared towards personalizing the shopping experience. CFO Dan Jedda called the transformation a “multi-year endeavor.”

In addition to fewer new customers, Jedda said the guidance “reflects the ongoing macro impact of global supply chain challenges in the industry.”

Workout bike maker Peloton became a pandemic darling in 2020. That was a long time ago.

In November, the stock fell 35% in a single session after subscription revenue, digital subscribers and gross margin all fell short of expectations. On Jan. 20, CNBC reported that Peloton was temporarily halting production of its connected fitness products, sending shares down almost 24%.

Peloton said on Feb. 8 that CEO John Foley would step down and the company would trim 20% of its workforce. The stock is down 83% from its 52-week high in July.

Affirm got a major jolt during the pandemic as its “buy now, pay later” offering was widely adopted by online retailers. Amazon even jumped aboard in August, helping boost the stock 71% that month.

Since reaching a high market cap of about $47 billion in November, Affirm shares have tumbled 81%, and the company is now valued at $9.5 billion.

The stock sank 20% or more in consecutive days in February, even after its revenue and forecast exceeded estimates. Analysts at DA Davidson said the full-year guidance was disappointing because it implied second-half weakness. Still, they recommend buying the shares.

“With expanding consumer adoption amid a broadening Affirm retail footprint, Affirm’s volume growth is accelerating while most BNPL peers are slowing,” the analysts wrote. 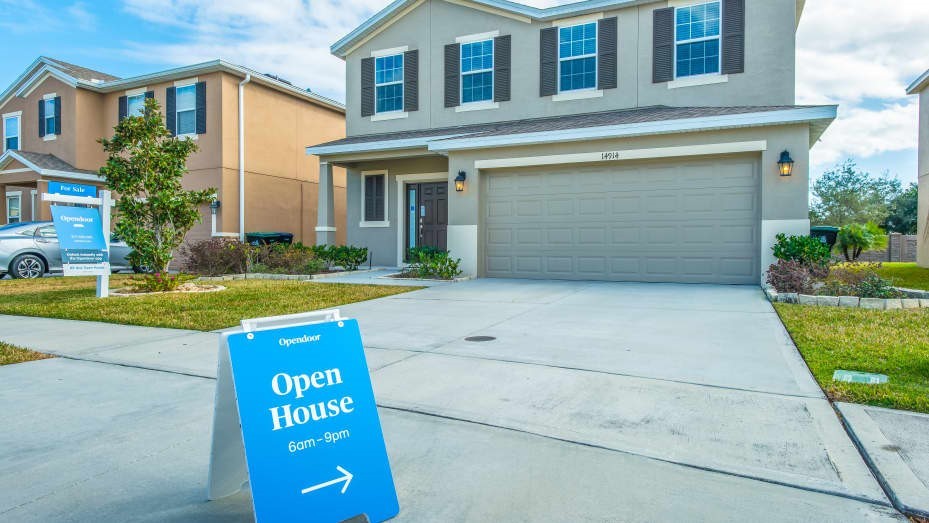 Opendoor pioneered the iBuying, or instant buying, home market, using a combination of technology and people to purchase houses in high volumes and then sell them. When rival Zillow announced in early November that it was exiting the market, investors saw it as a positive sign for Opendoor, sending the stock up 16% in one day.

However, in the four months since, Opendoor is down more than 70%, and the stock is down 78% from its 52-week high almost a year ago.

Opendoor’s steepest plunge came on Feb. 25, when the shares lost 23%. Like so many other out-of-favor tech companies, Opendoor topped estimates and beat on its outlook, but investors hit the exits anyway. The one key fourth-quarter metric that disappointed was contribution margin, or the revenue left from home sales after costs. That number was 4%, down from 12.6% a year earlier.

On Feb. 18, Roku’s stock fell 22%, tied for the largest single-day decline since the streaming company went public in 2017. Roku’s fourth-quarter revenue and first-quarter guidance both missed expectations, prompting Pivotal Research Group to give the stock a sell rating.

TV unit sales have declined in the U.S. as device manufacturers have run into shortages. Roku is eating the costs rather than passing them to customers.

“In essence, Roku is going to grow revenue at a slower than expected pace in combination with a massive ramp in expenses, into potentially a global economic slowdown with increasing levels of competition,” Pivotal’s Jeffrey Wlodarczak wrote in a note.

The Israeli website builder Wix is still taking market share, but at a more modest pace, Atlantic Equities analysts Kunaal Malde wrote in a note to clients earlier this month. He lowered his rating on the stock to neutral from the equivalent of buy.

A decade ago Wix was growing revenue by 95% a year. But growth dipped into the teens for the first time in the fourth quarter.

Wix shares fell 23% on Feb. 16, after the company reported fourth-quarter results, the largest decline since its 2013 Nasdaq debut. Revenue and first-quarter revenue guidance both failed to meet analysts’ expectations. The shares are 77% below their 52-week high from April.

“Sales and marketing efficiency is moderating on a gross profit basis,” Malde wrote. As it pulls back on spending, “Wix also risks losing incremental share of higher-yielding commerce websites,” he added.

Yet investors cut Redfin stock by 20% on Feb. 18, after the company issued its fourth-quarter numbers. The shares are 76% below their 52-week high from March of last year.

Redfin’s gross margin was narrower than expected as a result of higher transaction bonuses and personnel costs, Chris Nielsen, the company’s finance chief, said on a conference call with analysts.

Revenue per transaction also inched lower. The company has seen a shift in its user base with people moving to cheaper homes, Nielsen said.

If you’ve eaten under a heat lamp at a neighborhood eatery in the past couple years, you’ve probably become familiar with the name Toast. The company grew up by providing point-of-sale software and hardware to restaurants and emerged as an industry heavyweight during the pandemic by helping customers transition to a world of contactless ordering and payments.

Toast went public in September and rallied steadily until early November, reaching a high market cap of about $35 billion. It’s since fallen about 75% to $8.8 billion.

The biggest one-day drop, an 18% plunge, came on Feb.16, after revenue beat estimates but the company’s loss was wider than analysts expected. Revenue is projected to increase 39% this year and 33% in 2023, and the company is “still a strong share gainer in the U.S. restaurant space,” according to a note last month from Mizuho Securities analysts, who have the equivalent of a hold rating on the stock.

Please note the above article was first published by CNBC and should not be regarded as individual investment advice on whether to buy, sell or hold the companies mentioned in this article. Please speak to Ethical Offshore Investments (or your personal adviser) BEFORE you make any investment decision based on the information contained within this article.

If you would like to learn more on the range of high growth potential funds, with a bias towards investing in companies focused on Technology, Cyber Security, Software as a Service (SaaS), FinTech, Healthcare and Biotechnology, please click on the More Information button below and we will contact your personally.