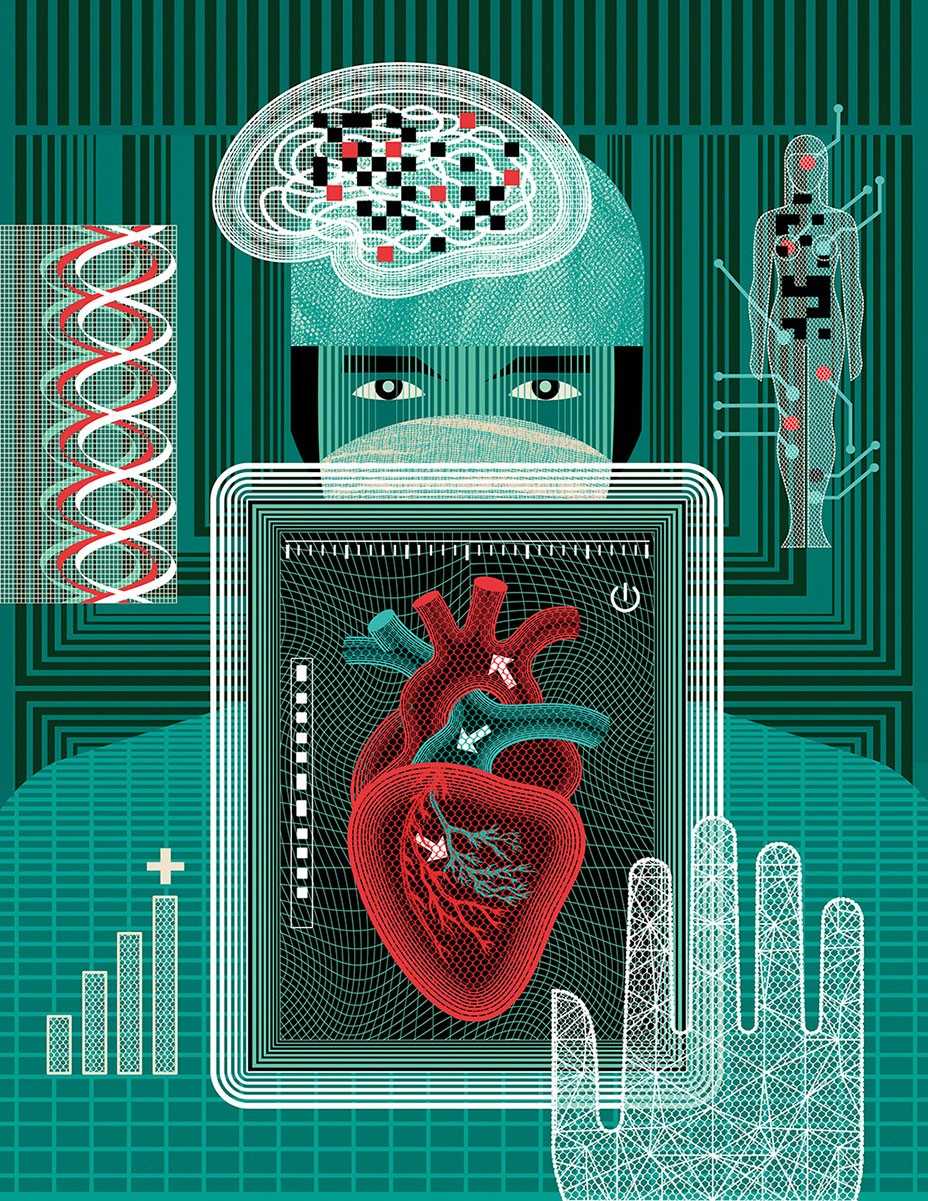 Illustration by the Balbusso Twins

Please remember that the value of an investment can fall and you may not get back the amount invested.

In half of coronary artery disease cases, the presenting symptom is death. That’s why early detection matters. NHS doctors in England now have a new diagnostic weapon to fight the disease.

Used in the US since 2014, HeartFlow Analysis uses artificial intelligence to turn a CT scan of the patient’s heart into an interactive, 3D model. With its help, cardiologists can assess potential problems with the arterial blood supply and decide on treatment.

Tom Slater (pictured left), joint manager of the Scottish Mortgage Investment Trust, explains: “Before HeartFlow, doctors either had to do invasive tests, including surgery, or other non-invasive tests that didn’t give them the data about potential blockages they needed.

HeartFlow combines cutting-edge image recognition and fluid dynamics technologies to model the blood flow around the heart. It’s a significant advance. Heart disease is a leading cause of death, accounting for around 16 per cent of all deaths worldwide.”

Not only does the Californian company’s programme work, but according to the UK’s National Institute for Health and Care Excellence (NICE), it represents a £391 per patient cost saving to the NHS. Thus it satisfies Slater’s rule of thumb for medtech, biotech and other healthcare companies considered for Scottish Mortgage’s £19bn portfolio: “Does this company improve patient outcomes? Does it reduce the costs of the system?”

At present, about 17 per cent of Scottish Mortgage is invested in medically-related firms, compared to 12 per cent five years ago and 3 per cent 10 years ago.

The trust’s enthusiasm for the sector stems from a convergence of technological breakthroughs that have accelerated innovation. These have allowed companies with disruptive new technologies to attract investment on the strength of encouraging gains, including in the tackling of the most feared afflictions: cancer, heart disease and Alzheimer’s.

A principal game-changer, according to Slater, has been the improved understanding of the genetic and molecular basis of disease and the “precipitous fall” in the cost of gene sequencing.

“Biology is very, very difficult,” Slater says. “It’s really the progress made in the field of information technology that’s allowed us to get to this point where you can see progress. It’s the cumulative impact of advances in fields as diverse as mRNA therapeutics and machine learning, DNA sequencing and cloud storage. The toolkit we use for understanding disease has become a lot more powerful.”

Slater draws a parallel with less life-and-death industries, such as retail and media, where technology has opened opportunities for companies with better, cheaper products.

“Until now, you haven’t seen this same trend in healthcare. In fact, you’ve had the opposite: continuous cost inflation. When combined with an ageing population, the growing proportion of the nations’ GDP spent on healthcare was unsustainable. Now these exciting, deflationary technologies are converging to reduce costs and significantly improve outcomes for patients.”

That cost reduction is critical. Getting a new drug from lab to market costs on average around $1.3bn, according to a recent US study. Most of that goes on the nine out of 10 candidate treatments that fail somewhere between early clinical trials and regulatory approval.

“For a long time, it made most sense to develop me-too drugs that merely refine existing therapies. They had lower chances of failure and were easier to sell into big existing markets,” Slater explains. This hit-or-miss dynamic helped give healthcare an unsustainably high cost-base and resulted in drugs that weren’t making big improvements to patients’ lives. As Slater sums it up: “Companies were basing decisions on commercial opportunities instead of pursuing basic science for its own sake and seeing where it takes you.”

The declining grip of ‘big pharma’ and its search for the next ‘blockbuster drug’ has coincided with the rise of more fundamental research into the causes of disease. By shining a spotlight on the causes of ill health, artificial intelligence (AI) and machine learning are increasingly powering the hunt for novel therapies. 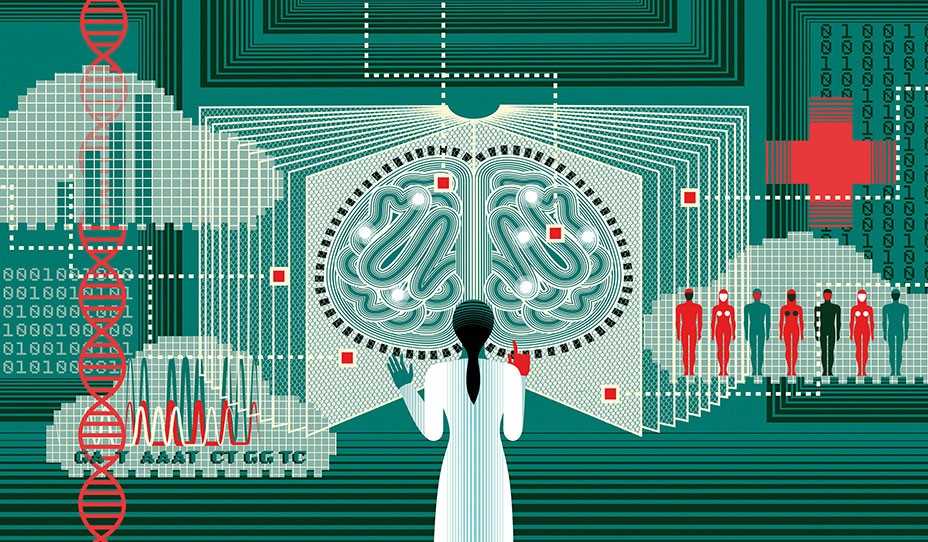 With its ability to crunch through vast datasets, AI is replacing the slow and expensive parts of the drug discovery process. Until recently, researchers seeking to understand the relevance of a gene or genetic mutation to a condition had little option but months of trial-and-error laboratory work.

“Today, scientists no longer have to start from a hunch,” Slater says. “They can move more quickly at much greater scale, to explore millions of different possibilities.”

Another game-changer, he asserts, is the increased willingness of venture capitalists and other investors to provide more capital to support early-stage biotech companies.

Slater cites the example of Denali, which is seeking a cure for neurodegenerative diseases such as Alzheimer’s: “The traditional model of funding research was to develop a drug and attempt to raise money to get through to the next trial stage. The companies that seem most interesting to us today are raising a lot more money that isn’t tied to a specific objective. Denali, for example, now has a billion dollar-plus balance sheet.

With that level of investment, it doesn’t need a blinkered concentration on short-term milestones. Instead, it can follow the science. And if the lead drug candidate has problems, say with its safety profile, it promotes the second candidate. The whole time it’s building its understanding of the problem, which in the case of neurodegeneration is mainly about getting drugs across the blood-brain barrier. This long-term focus leads to much more interesting outcomes than the traditional stage-by-stage biotech funding model.”

In the field of ‘personalised medicine’ – therapies tailored to an individual’s genetic makeup – Slater cites Chicago-based Tempus Labs as an example of a company successfully exploiting AI. Tempus draws together 3.7 million cancer patients’ records worldwide, its AI algorithms ‘reading’ and sorting them so they can be searched and analysed.

“Because there are so many clinical trials going on in oncology, it’s very difficult for physicians to keep on top of all of the latest data and then match the findings to the individual circumstances of that patient,” Slater explains. Tempus’s algorithms can match physiological data with genomic data and recommend personalised, real-time treatments for patients in acute need.

As societies age, the pressure to satisfy what Slater calls “unmet clinical need” – the cruel ailments that still blight so many lives – is only going to grow. Incremental change, he makes clear, is the wrong prescription. Better, he believes, to seek out and back transformational change.

Nic Fleming is a Bristol-based science, medical and technology journalist. He has worked for the BBC, New Scientist, The Guardian, The Sunday Times and Nature.

If you would like to learn more about the Scottish Mortgage Trust as well as the wide range of quality funds that are available to investors, click the More Information button below and we will contact you personally.