The founding manager of CFP SDL UK Buffettology tells Trustnet about the most exciting investment in the fund, and his plan of action if it ever becomes too big.

Rarely do recognisable names within the investment world become household names generally. Warren Buffett and Benjamin Graham are two exceptions and their investment philosophies dominate the CFP SDL UK Buffettology fund, a characteristic that manager Keith Ashworth-Lord said makes it stand out from its peers.

The fund, launched by the FE fundinfo Alpha Manager (pictured) in 2011, applies the pedigree of Graham and Buffett’s style to the UK market. It has done this with great long-term success, making the second best returns in the IA UK All Companies sector in the past decade.

Performance of fund vs sector since launch 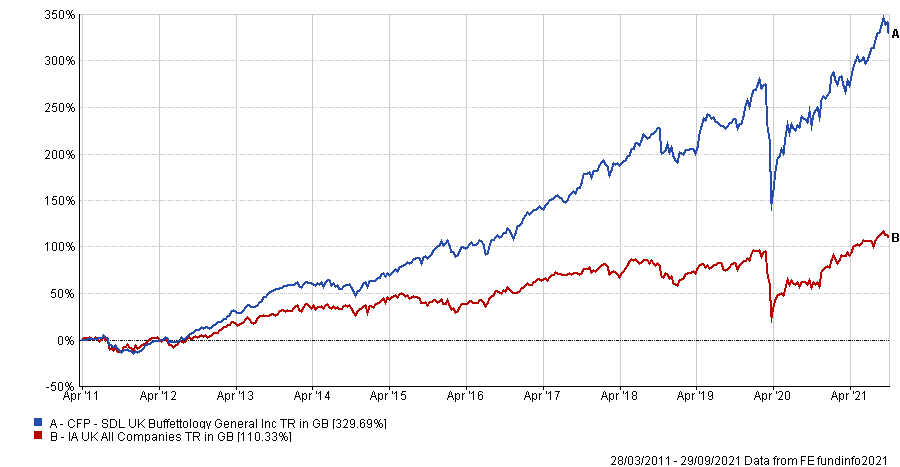 An avid Manchester United fan, Ashworth-Lord said that if his fund were a player, it would be “Cristiano Ronaldo, of course”.

Below, the manager tells Trustnet about his best and worst investment calls in the past year, and when the fund’s size could become an issue.

What is your stock picking process?

We research and identify the very best businesses around that represent enduring franchises with pricing power. We then buy the shares, but only when we feel we’re getting more in economic value than what we’re actually paying for.

And unless the fundamentals change and compromise the original investment thesis, we hold on to the shares forever and allow compounding to work its magic.

What makes your fund different from its peers?

I think it’s our process of Business Perspective Investing, which overall governs the way in which we select and manage our investments. This process has a long track record of success going back decades, and a good pedigree with people like Benjamin Graham and Warren Buffett using it.

I’ve been practising this and getting great results for the last 25 years. This is a very, very successful way of investing and a methodology that’s got a long pedigree, and it works. Well, it works for me anyway.

Best and worst stocks over the past year

For a business that we’ve owned for the entire 12 months, Focusrite, a music and audio products company has been our best performer. Its share price has risen by 126%, from 760p a share to 1720p.

But the best new investment within the 12 months, so we haven’t held it for a whole year, was Dark Trace, a standout business which IPO’d at the end of April.

We invested at IPO when the shares were 250p and by the end of August they’d gone up 105%.

It’s very easy to explain why it did badly. It had been capitalising on intangible assets on a new system that it was putting in for its UK businesses, but the system didn’t work and it ended up writing off, I can’t remember the exact figure, about £80m to £85m. And the market did not like that.

That was one we already had in the portfolio, but in terms of businesses added within the past 12 months, Team17, a video games developer, was the worst performer. Its share price is only up by 10% since we purchased it.

I knew this business really well for 10 years before I set up Buffettology. I’d actually invested in it myself with my own money before we set up the fund.

It was literally one of the first companies we bought when Buffettology launched and we’ve held it since then. Initially we paid 373p per share and in the 10 years since then it’s risen to 12,000p per share. That’s a 30-bagger for the fund.

There are other multi-bagger names in the fund, Jet2, AB Dynamics and Focusrite. But Games Workshop was definitely the outstanding investment.

What sectors won’t the fund invest in?

We don’t really like anything in commodities, so mining, and oil & gas and banks. We like businesses which have their own pricing power.

We tend to avoid ‘blue sky technology’, or ‘bleeding edge technology’. We do hold pharma and tech names, but they’re ones where the product and idea are proven.

And also the real dullard areas, the ones where you’re supposed to find value in some quasi difference between growth and value, which I don’t recognise.

The fund is currently £1.8bn in size, do you have a limit?

This is a really interesting one, because when we started off, we thought if we get to £500m, we might start to get constrained on some of the smaller companies and it didn’t really happen. It happened when we got to £1bn.

For example, we had three small businesses, micro caps, which were under £100m market cap each, and we owned 15 to 20% of the company, so we couldn’t go any higher terms of ownership together, but the three of them only made up 1.5% of the NAV of the fund.

You can see from that perspective if any one of them had doubled, it wouldn’t have even moved the dial on the fund, yet here we were investing a lot of research time into them. At that point I decided sub-£100m market cap was not for us. We sold the three names and we’ve never gone that low again.

There is a mixture of small, mid and large caps in the fund and at the moment we don’t feel as though we are being constrained.

But make no doubt whatsoever, the bigger the fund gets, the harder it is to find some of these smaller investments where we can actually get a meaningful stake and ride with them.

To answer your question directly, at the moment, I feel comfortable. I suspect if we got much, much bigger, it might start to make life a little bit harder. And I’ve also said if I feel like performance is being constrained by the size of the fund, I’ll do something about it. And that sort of thing will be basically switching off marketing to try to calm things down a bit.

What do you do outside of fund management?

I’m a bit of a model railway and stamp collector buff. Also, I’m an avid Manchester United supporter, and have been for 40 years.

And a space buff, which ties in with my love for anything American. The Kennedy Space Centre at Cape Canaveral is my spiritual home in this world.

At Ethical Offshore Investments, we focus our attention on quality funds such as the CFP – SDL UK Buffettology Fund for our clients. We have held a very positive view on the quality management of this specialist UK equity fund and has been, and remains a holding for our diversified global equity exposure.